5 Students, 1 Board, and a Man in the Middle 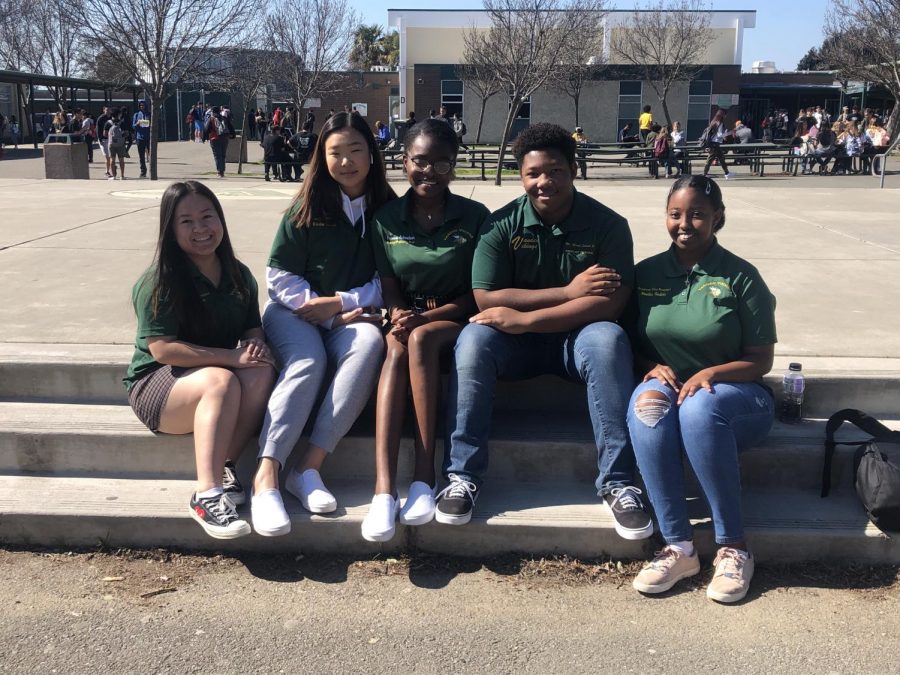 Indigo Washington, News Editor
On January 14, 2020, School Board Student Representative Isaiah Carter tried to express his Vanden facility concerns to the board.  Carter’s fellow ASB members Vanessa Achamfour, Kylie Cesar, Bonika Gudeta, and Rachel Lee collectively constructed this list using their personal experiences at Vanden.  Superintendent Pam Conklin dubbed the students’ concerns—including class size, new construction, use of space, broken pipes, and dead trees— as not being “board matters.”  Conklin then directed the committee to the manager of their site, Principal Kristin Shields.

According to Carter, Board Clerk Janet Jackson Forbes and Assistant Superintendent Sue Brothers wanted to “see more” of the students and “get more involved in our community and on our sites.”  Carter sees presenting student concerns to the board as the best way to fulfill the board’s wishes of student involvement and take direct action to resolve these problems.

Carter recruited members of the student council, or Associated Student Body (ASB), in creating the committee.  Senior Publicity Representative Vanessa Achamfour originally joined in support of Carter.  Soon her motives shifted.  “As we actually started talking about the problems that are going around at school and brainstorming things to propose to the board, it [got] more interesting and also more serious.”

Carter captured Freshman Vice President Bonika Gudeta’s attention when he originally pitched the idea of the committee.  Gudeta’s desire to see her worries addressed keeps her going.  “We all have times where we complain about school, but at least making a change is [better].”  Gudeta also mentioned that “highlighting” these issues allowed her to “learn more about school and get to see these problems” to enact change but also to gain acknowledgement.

In a different light, Sophomore Class President Kylie Cesar works from first-hand struggles with the listed concerns, specifically classroom resources.  “In Spanish, it’s hard for us to learn when there’s such a limited number of things like the boards being taken up by another teacher.”

The District Board dismissed the committee twice.  Carter was told by Conklin that he could not speak in the meeting given his liaison position thus the committee had to prepare their notes to speak without him.  In light of preparing to hear the students speak, Superintendent Pam Conklin, one of three in the Travis Unified School District, gave the students a rundown of how she would like them to approach topics like these.  This once again, blocked the committee from expressing their thoughts.

The California Student Free Expression law, written in the California Education Code and posted by Mike Hiestand on the Student Press Law Center’s website, says that  “pupils of the public schools, including charter schools, shall have the right to exercise freedom of speech and of the press including but not limited to, the use of bulletin boards, the distribution of printed materials or petitions, the wearing of buttons, badges, and other insignia, and the right of expression in official publications.” This includes district board meetings.

The law also reads, “expression shall be prohibited [where it is] obscene, libelous, or slanderous.  Also prohibited shall be material that so incites pupils as to create a clear and present danger of the commission of unlawful acts on school premises or the violation of lawful school regulations, or the substantial disruption of the orderly operation of school.”  This supports admin’s priority of safety.

Superintendent Conklin did not deny redirecting the students; however, she did put a buffer on the students’ ability to express their concern at a private meeting she held with Principal Shields, Assistant Superintendent of Human Resources Clay McAllester, and the committee to review board policies.  In the minutes from this meeting recorded by Principal’s Secretary Marleen Hurst, Superintendent Conklin stated that “the day to day operations/decisions are not under the school board authority” and that those concerns are to be dealt with on the “site level,” which Principal Shields also explained as the “chain of command.”

While the board’s rights read that they “shall adopt rules and regulations in the form of a written publications code, which shall include reasonable provisions for the time, place and manner of conducting such activities within its respective jurisdiction” their rules as stated by Superintendent Conklin are that “By law, the Board is only allowed to say ‘Thank You’ and ‘Next speaker’ after someone speaks publicly at a board meeting.”

Despite this, Cesar explains that the committee felt discouraged and “shut down” expressing the wish that the Board handled things differently.

Come January 15, the Superintendent had a new interest in the students’ concerns and immediately called a second meeting with the entire committee and Principal Shields to review their needs.  Carter felt Conklin’s interest “wasn’t really out of sincerity” but that it was “pressure on the Superintendent, [and] pressure on the district because the board got a glimpse of what we wanted to say and they were upset.”  Carter also made it clear that Superintendent Conklin is employed by the district and recruited Principal Shields in “making the problem go away.”

Principal Shields relayed the information that board meetings were “actually not the place to get feedback from board members” and that it was “not a two-way discussion.”  Regardless of this, she thinks it is important for district administrators to “interact at the student level.”

In an attempt to get the Board’s perspective, Superintendent Conklin’s response is that  “[the board] certainly cares and values the student voice.” She and Principal Shields claim to be working on a monthly meeting time for themselves and the five students involved in the committee yet the students still feel unheard and unsupported.